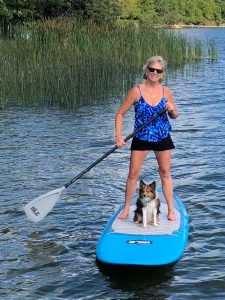 In 2018, a friend who was a member at The Warehouse, invited me to take advantage of a free week of classes. I was nearing 60 and needed to focus on getting my body healthy so I agreed to give it a try.

In August of 2017 I underwent appendectomy surgery. What should have been a surgery that I’d recover from within 2 weeks, ended up being a 3 month nightmare and 5 months on disability from work. The surgeon, during the appendectomy  inadvertently cut my colon, which he then stapled too close to the cut. This was not disclosed verbally to me or my husband. I went back to the surgeon just days after being discharged from the hospital because I was progressively getting worse. After a few interventions, no healing was occurring. I was only seeing things progressively getting worse which landed me in the hospital to be treated for being septic.

One week later I was released with multiple prescriptions,  and three visits per week from in-home care nurses. Three months after my initial surgery I had to have another surgery to correct the problem, which was completed by 2 surgeons. They had to remove 12” of my large intestine and 6” of my small intestine, due to the damage that had occurred. Surgery was a success but healing would take a lot longer, due to the septic nature of my wound.

After months of trying to build up strength by walking and doing normal day to day activities I found The Warehouse. In my first week, I struggled through each class, but I didn’t want to give up. I explained what I had been through with my surgeries to the instructors because I knew I couldn’t do what others were able to. From there, I continued attending classes.

I have to admit there were times I felt it was too much for me. I had lost so much of my muscle mass and stamina. I couldn’t do a burpee, a push-up, nor could I complete the different timed exercises. It was the encouragement from other members, and instructors that I received that pushed me to continue on my journey. That little push to give one more push-up or hang in there just 10 more seconds to finish an exercise strong IS what gave me back the strength I once had. Thanks, Warehouse team!

The biggest change for me is that I’ve built up muscle mass and have toned my body. YEAH!! I don’t want to let age slow me down so it’s up to me to keep fighting back by keeping my mind and body healthy. This became crystal clear when I had a water skiing accident in July of 2019. I ended up with 6 broken ribs, and a small puncture in my lung. Of course attending class was out of the question until I was healed. However,  I knew it would only be temporary and I’d be back to continue on my journey, which I have. I also took an early retirement offer from my employer back in September 2019. Staying healthy and enjoying retirement is now my life long plan.