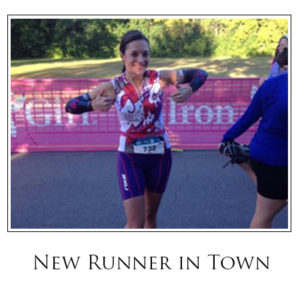 There is a NEW RUNNER in this town!
The first time I met Alena Rakita, she cruised up to my Warehouse studio on her awesome bike on a hot summer evening.  She was new in town, and came out to explore what Rosemount had to offer for fitness. This Iron Girl/Triathlete/ Runner had just moved to Rosemount from New Jersey, and signed herself up for the Twin Cities Marathon a few months before moving.  This was her first time attempting a Marathon. She wanted to get her cross training set up, and found “The Warehouse” online and thought she’d check it out.  She joined us for Boot Camp that night, and signed up for a monthly membership on the spot.

We have had the pleasure of getting to know Alena, and her significant other, Jeff, over the past few months.  They have been an awesome addition to our Warehouse family, and I had the pleasure of sitting down with Alena to discuss her experience  with training for the Twin Cities Marathon, while overcoming some obstacles.

Alena is a go-getter, I knew that the moment I met her. With her move to Minnesota, and a demanding work schedule, her training for the Marathon was disrupted.  She suddenly realized she was pretty far behind on her current training schedule, and she needed to get more miles on her legs.  Fortunately, she had her cross training dialed in with Boot Camp, Hard Core Abs, and Insanity classes at “The Warehouse.”  However, she wasn’t able to get out and run as often as she planned, and she was getting concerned.

Fortunately, Alena had a friend from New Jersey who was supporting her goal to run the Marathon. She kindly dropped articles into her email inbox every week, to help her stay focused on her goals. This friend knew how important it was for her to complete this Marathon, and do well. One of those emails turned out to be GAME CHANGING for Alena.  Alena was introduced to running expert Jeff Galloway’s program, and a light bulb went on!  At this point, with a few weeks behind on her other program, she shifted gears and embraced the Galloway method.

Jeff Galloway’s program breaks the Marathon down into “chewable chunks,” similar to the interval training she got used to doing in the classes at “The Warehouse.” By adopting Galloway’s method ( running for 5 minutes, and walking for 1 minute), she was forced to rest, and she believed it helped her bank her energy when she needed it the most on the long training runs. Alena was smart enough to modify her goal, and use a program that made sense with her circumstances. One of the challenges she faced during the race was from the spectators.  When she was walking, spectators were falsely under the impression that she was walking because she was tired.  Little did they know, she had a grand plan in place!


Alena finished her first Marathon, using the Galloway method, at 4:07.  She wants to do another Marathon next year, and is researching some more innovative training programs.  She is thinking about using a 20 week program called “6 miles to a Marathon.”  Whatever she decides, we know she will CRUSH it! Life always has a way, of getting in the way.  You can let it buckle you under the pressure, and you can give up, or you can keep on keepin’ on!  Congratulations, Alena! You are an inspiration!