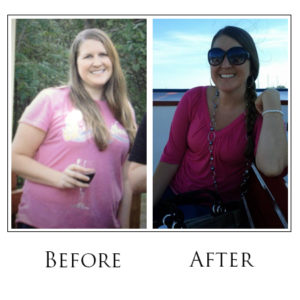 After getting divorced, I put on 50 pounds and fell into a deep depression.  I let myself go, mind, body, and soul.  After about a year and half, I started working on myself again. Starting with my mind and soul.

Once I felt I was mentally in a better place, it was time to start working on my body.  March 2012, I got a catalog in the mail for Community Ed classes available in the Rosemount area.  Even though it wasn’t in my neighborhood, I started driving the 12 miles to the Martial Arts building to attend Boot Camp classes with Nickie Carrigan four days a week.  These classes, along with changing my eating habits, helped me lose 15 pounds in two months.  I continued to go to class 2 to 4 times a week and watched what I ate.

Over the winter I started doing Insanity at home on my home and loved it!  I was one month into and pulled a muscle in my shoulder that sidelined me for many months.  Once my shoulder healed I set a goal to run my first 10k, and accomplished this along with pulling a hamstring and needed to take more time off from working out to let my body heal.  Once my leg healed enough for me to start working out again, I went to what I was comfortable with, Nickie’s Boot Camp class!

While attending one of the many classes at the Warehouse, I looked in the mirror while in plank position and got sick to my stomach.  I was disgusted at how far down my stomach hung while I was in plank position.  It was at that moment that I decided that working out alone wasn’t going to cut it, I needed to start eating better again, as this slipped to the waist side as I was healing my leg.  That’s where the Beachbody 21 Day Ultimate Reset (21 Day UR) came in.  Nickie was nice enough to put my account at the Warehouse on hold while I took the time to work on clean eating with the UR.

After just 21 days, I lost 12 pounds, was taken off a prescription medication, and used my inhaler for sports induced asthma far less while working out then I did before doing the UR. Doing this made me realize that health is not just a number on a scale, but an overall feeling of one’s self.

My recent inspiration: My older sister has Cerebral Palsy (CP) and has a hard time working out due to this physical disability.  She saw the change I had made from doing UR and the medical technician in her started asking questions.  Once she found out that you still eat a healthy portion of calories, you intake zero caffeine, and you can still do light workouts, she decided she wanted to try UR. Due to a lack of disposable income, she decided to do UR without the supplements. Just by eating clean for three weeks, she lost 6 pounds and 11 inches overall!

I know I wouldn’t have done it if I, myself, didn’t show up to class and watched what I ate, but it’s an awesome feeling when you surround yourself with others who have the same goals as you do, to be healthy.  So after 16 months, I became a Beachbody coach, lost 30 pounds, did Insanity and 21 Day UR, drank Shakeology, and attended classes put on my an amazing woman and her staff. After all of that, I found myself again.  Do I feel I still have some weight to lose?  Yes. But, I am happy with where I am at in my life and will lose the final pounds with a smile on my face and in my heart.