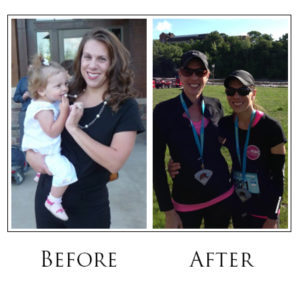 If somebody had told me six years ago that I would have run marathons, half marathons, and be teaching group fitness classes I would have laughed and insisted they had the wrong girl. I never had any interest in running or getting up in front of a group of people. In fact, I actively avoided both of those things. It wasn’t that I was against fitness and exercise. I used my fitness time as my alone time to regroup and think. I liked to do aerobic tapes and walk on the treadmill or outside. I was never what you would call an athlete as a kid. I was much too shy to participate in sports and too afraid to even try. I have struggled with anxiety and depression my whole life and liked to stay in my comfort zone. During my senior year of high school, I had a particularly bad bout with depression and panic attacks and fitness was not a priority. My doctor suggested that I get back to a regular exercise routine to help boost my mood. This, along with great family and friend support, helped me come out of my shell and enter college a more confident person. I lost the freshmen 15 instead of gaining it and knew that being active and healthy played a big role in that. I continued to be active throughout college and graduate school and things were running smoothly. I met my wonderful husband and step-daughter and quickly wanted to start a family after we were married. This proved to be much harder than I thought. After early pregnancy losses and infertility, we were blessed with a healthy baby boy about two years after we were married.  My pregnancy went well and I continued to walk and be active throughout. I did not have trouble losing the baby weight, but not for a great reason. I had extreme postpartum depression and anxiety and fitness was not on my radar. When we decided to try for a second child, we struggled again. This time proved to be much more difficult. I went through many procedures, injections, surgeries, early pregnancy losses, and countless medications for about two years. During this time, I was not encouraged to work out, as many of the drugs I was taking were quite powerful and I was not to put any additional stress on my body.

Needless to say, there were many tears, mood swings, side effects, and some weight gain that went along with all of this. My body was not in my control and that was very frustrating.  I finally did become pregnant with my daughter and my pregnancy was uncomfortable and nerve-wracking to say the least! I was not allowed to exercise, nor did I want too, and I was very excited once she arrived and I knew she was safe and sound. Unfortunately, my postpartum depression and anxiety returned again but this time I was more prepared. My doctor advised me to exercise a little bit everyday to help my mood and I would soon get into a regular routine.  When I was a few months postpartum, I began going to my neighbors “fitness studio” in her garage along with my sister and brother-in-law. My trainer, Cara, was a triathlete and marathoner and I was in awe of all she accomplished. After a few months, Cara suggested running as part of our warm-ups. I balked at this idea. I did not come there to run thank you very much!  After I realized I could eventually run a block without falling over and then two blocks a crazy thought entered my head. Maybe I could train for a 5k. Who was this madwoman suggesting this crazy idea! My sister and partner-in-crime, Jessica, and I followed a couch to 5k program and actually ran a 5k! My pregnancy and infertility weight were finally gone and my energy was back! Soon our goals increased. We wanted to decrease our times and increase our distances. Our first big race was the Twin Cities 10k and I was on top of the world when we finished it. Next up was double digits and we took the plunge and signed up for a 10 mile. I was sure this was the longest distance I would ever go, but we had caught the running bug and 10 miles turned into half-marathons and eventually marathons. Running gave me confidence and a feeling of pride that I never expected. About halfway through my running journey I realized that I needed strength training to go along with my exercise regimen. I wanted to build strength and gain muscle and lifting weights was not something I would do on my own. I attended a bootcamp class at Nickie’s old location and really enjoyed it. Not only did I get the strength training I was looking for but I gained a lot of new friends. Nickie’s guidance was huge in helping me build confidence in myself and I was pleased with the strength I gained. Her infectious upbeat personality was contagious and it was fun to go to classes! When Nickie suggested I become certified and teach some of the Warehouse classes I again laughed and thought no way! Deep down I knew that part of what helped me grow as a person was stepping out of my comfort zone so I eventually became certified in Piyo and began team teaching with my great partner Karla in the spring of last year. It has been a privilege and honor to teach the members of The Warehouse and I still can’t believe sometimes that I am allowed to do it! Fitness helped me in so many other ways than just losing weight. I gained a whole new perspective on myself and what I could accomplish. This has definitely extended into all parts of my life and I now know that friends and fitness are a big part of my well being. If anyone out there doubts what they can accomplish, I would tell them I was an anxious, self-conscious, scared-to-death wallflower and if I can do it, so can you!!!!