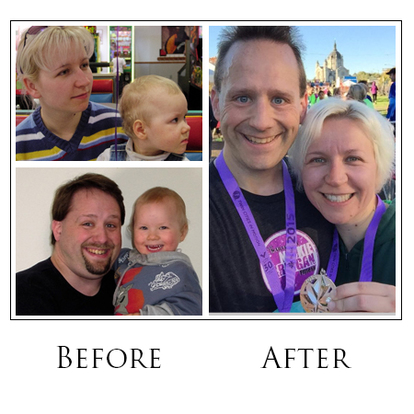 1. What did life look like before you focused consistently on nutrition and fitness?
Mark: Though my parents probably always fed my siblings and I healthy foods most of the time, I don’t recall being taught how to select and eat foods in a healthy way.  I grew up eating whatever was put before me, and developed the habit of wolfing my food down as quickly as possible.  Until I graduated high school, my teenage metabolism and semi-regular walks kept my weight and self-esteem in check.
When I entered college, though, I swelled up like a balloon.  My “freshman 15” was more like “fatman 60.”  Exercise was something I only tried once in a while, and I battled my emotions with the three weapons of fast food: sugar, fat and salt.  I suffered from lethargy, severe seasonal allergies, snoring, and a medium-grade depression that lasted at least a decade. I married my college sweetheart, mainly because it was comfortable and easy.  I knew that my father and eldest sister both had diabetes and other major health issues stemming from poor eating and exercise practices, but denied the fact that this had anything to do with me.
I wasn’t happy, but resigned myself to that existence because I believed that others’ happiness was more important than mine, and being healthy was for skinny people with better genes. After a true friend encouraged me to follow a childhood dream of learning to fly planes, my self-esteem and sense of hope increased.  I ended my dead-end marriage, met Margarita the Amazing, and began many parts of my life over again. But my health & fitness wake-up call didn’t come for another seven years.

Margarita: It’s time to confess, everyone. It took me a long time to come to grips with sharing my “Inspirational” story. I had to think back to when I came to this country, just a few months after 9/11. Here I was, a 22-year-old in a country shaken up from the horror of the events, yet people were friendly and the sun was shining. In a new country, with a 2-year-old, I had zero certainty about “what is next?”.  I quickly learned that unless I could drive I couldn’t get to a grocery store or to the day care I placed Valery in to socialize while I tried to get an idea of what I was gong to do. (I grew up in a very rural area where only people with decent income had cars and very few women were driving).
I came from a country where McDonalds and Burger Kings were just appearing and there was no such thing as drive-thrus, movie theatres with abundance of sugary drinks and popcorn. I will never forget going shopping at Rainbow for the very first time. The size of the cart shocked me, but I was even more shocked by the amount of food that was purchased that night (luckily I was not the one paying )
This is where it all began. I learned to make Pillsbury Dough Boy cinnamon and dinner rolls pretty quickly and oh man, did they taste good. I would spend hours and hours cooking for everyone and not so much time understanding the nutritional value of the food I was consuming. I often refer to this time as “culture shock”.
I had lots of time on my hands to continue dancing- something I have done since I was 5. I danced in the basement of a large suburban home, while everyone was at work, but that wasn’t enough. I’ll never forget waking up one morning, looking in the mirror and thinking “Ok girl, time to find fitness center”. I went to the gym a few times, but felt lost over and over again as I had no idea what I was supposed to do. I was terrified of all these good looking people and the voice in my head said- “good luck looking like that”.

2. What made you decide to make a change?

Mark: “2010: never again” is the phrase that never quite leaves my mind.  In the same calendar year, my eldest sister and my father both died from health problems that I believe stemmed from decades of poor eating and exercise habits. My wake-up call had arrived in cartoon fashion: a sledge hammer to the head.  My sister was only 52, my father 72.  I looked into their pasts, and I saw my present.
At that time, I was taking a martial arts class at a studio where Margarita was also taking some fitness classes.  I joined her and began exercising several times a week, but didn’t change my eating habits until a few years later when our beloved studio closed and we met our new family at The Warehouse. At first, I declined involvement the “studio challenges,” but there was something about the “21 Day Fix” that really interested me.  Maybe it was the allure of the uber-hot Autumn Calabrese, whose picture is all over the program? The more I thought about it, however, the more I realized why that program worked for me:
I was ready to forgive myself for the years I had already spent neglecting my health.
I was ready to invest in my own future.
I was ready to get back up whenever I got knocked down.

Margarita: Fast forward a few years and we were living in Eagan. I was driving to school, to the grocery store and able to take my daughter to gymnastics school right across from our apartment. I found a small gym and would spend about an hour on a treadmill every morning. I still struggled to figure out portion control and eating out was much more convenient than preparing food at home after a long day at school.
I don’t recall gaining a ton of weight, but I didn’t like the way I felt. I got pregnant with Alex and we moved to Apple Valley. I continued to work out the entire pregnancy and jumped right into running as soon as he was born. I remember putting Alex down for a nap and sneaking into my basement to complete 30 minute ABS Diet workout and, later on, Jillian Michaels butt-kicking workouts. Man, did I like that routine, but I was lonely. I found a great martial arts studio and joined their boot camp classes. I finally found what I have been missing – group interaction and face to face instructions. They became my family that got me through the difficulties of grad school.  The longer I lived in this country and the more people met, the more evident it became- If I didn’t take charge of my life, I was going to end up paying the price in terms of medical bills because no one else would be reading labels and making healthy choices. I needed to improve my life to become who I wanted to be- a healthy mother, wife and daughter.

3. What has changed (race times, blood work, attitude, etc.)?
Mark: I can’t possibly identify all the positive effects that a mindfulness approach to health has brought me, but I sure can name some of them.
My cardiovascular capacity has increased greatly.  I used to huff and puff for several minutes after climbing one flight of stairs, and tended to avoid them whenever possible.  Now I seek them out, grin whenever I find them, tend to ascend them two at a time, and recover quickly.  I have been on several 5K runs, one 10K, and am in training to participate in a half marathon at the 40th anniversary Grandma’s Marathon this summer.
My general energy level is much higher.  The lethargy and depression I once had is all but a distant memory.  I enthusiastically volunteer to do whatever physical work needs to be done, whether it be at home or at work.
My mental focus has improved.  I am better able to concentrate on the things that require my attention, and more easily juggle the distractions and interruptions that come my way.
I sleep better, and my snoring and seasonal allergies are largely a thing of the past.
I have a 32 inch waist for the first time in 32 years.  I have muscles I can actually see for the first time in forever.
But I think the best part of all is yet to come.  My children are growing up watching their father care for his health on a daily basis.  They see me work out even when I don’t feel like it.  They see me push hard and aim high.  They see me get up when I get knocked down.  Hopefully they will get to keep seeing me well past 72.

Margarita: I will never forget the time I learned “our” martial arts studio was closing. I was angry and in disbelief that I will no longer have my fitness family. Until…our own Deb Larson told us about The Warehouse. I still remember as if it was yesterday, coming to The Warehouse on a hot summer day and being greeted by Nickie and Marc. I was amazed how welcomed I felt and how hard we worked out- there was no looking back.
Since then I have participated in many challenges, became a Beachbody Coach and completed a few rounds of 21 Day Fix Extreme. I found that Shakeology is a great meal on the go for me and have been enjoying it as my lunch for over a year now. I have participated in many 5K races and then added a few 10Ks, then a 15K and now getting ready to run half marathon.
I feel so good to be right where I am at and have MY fitness family back.
better example.