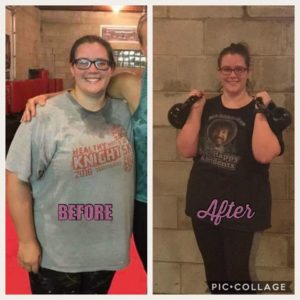 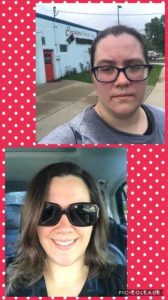 What did life look like before you focused consistently on nutrition and fitness?

I used to think I was doomed to be unhealthy for life. I was always overweight, even as a kid. And then a few years ago, it got worse. I gained an insane amount of weight in what seemed like a few short months. I never claimed to be a healthy eater, but I certainly did not blame bad eating habits for my bad health and weight gain. Instead I blamed hormones and bad genes and busy schedule and not enough sleep. With all those things going against me, I thought weight loss would be impossible. So, why even try? I HATED working out (or so I thought). I loved Caribou coolers and McDonald’s breakfast, though! I “balanced” eating all that junk by cooking dinner every night. I would generally cook balanced meals, so the fact that my mornings were full of garbage was not hurting me, really. Right?

What made you decide to make a change?

I got to a point where I was at my highest weight ever and in the worst shape of my life. I would get heart palpitations and had trouble breathing. I felt horrible all the time. Even so, I can’t actually take full credit for taking that first step towards change…..
Daisy won a 5k in May of 2017. When I found out that the prize for first place was a one-month pass to this place called the Warehouse, I had no clue what that was. Of course, I googled it and had to laugh a little when I found out that it was a place to work out. Obviously, something like that would not get used in my house.
But after a few days, I thought – well, why not? I had never done group fitness before. Maybe if I went for that month, it would give my body a little boost and then I would figure it out from there. I honestly had ZERO intention of taking it past that first free month. In fact, I doubted that I would even last a week.
When I called for the first time, Nickie answered the phone. Being that I had never actually met a fitness professional in real life, I just assumed they were all stuck up and “better than everyone” and so I was absolutely blown away by Nickie’s kindness and encouragement. Through tears, I told her that I was in the worst shape of my life and felt like shit all the time. And I asked her if she thought that someone like me could even do group fitness. And she said YES. And I showed up to my very first group fitness class the next day. Much to my surprise, I LOVED IT!
I met Amy and Eric that day, and they invited me to join their Facebook accountability group, Summer Strong. I started learning about eating better. Nickie told me about Shakeology, and I initially told her, “thanks, but no thanks.” But then as I was approaching the end of my free workouts at the Warehouse, I decided I would try it so I could get just one more free month. I was sure I would hate it and really doubted that I would stick with it anyway. Instead, I started feeling the benefits within the first week, and I have been drinking it daily ever since! Over the past year, I have learned SO MUCH about nutrition through challenge groups and Facebook groups and Beachbody programs (including 80 Day Obsession – the BEST). I completely stopped going to McDonald’s and Kwik Trip for my breakfast. I grab my Shakeology and go, every day! I still have the occasional Caribou or Starbucks drink, but it is a treat for me now, instead of a regular thing. I do not miss my old lifestyle AT ALL. With the help of Nickie, Paul, Jeanine, Marc, Bonnie, Lisa, and my entire Warehouse family, I have erased 30+ years of horrible habits. Just like that.

EVERYTHING has changed for me. Remember all those things I have going against me (hormones, bad genes, busy schedule, and not enough sleep)? Despite all that, I have lost 50 pounds. Yes, me, the same girl who thought losing weight was IMPOSSIBLE. I feel better than I ever have before. My breathing is better, I have no heart palpitations, my resting heart rate is down. I am stronger. I feel more energy.
I have gotten so much more than just physical benefits, though! I used to be so sad. I preferred to stay in my own bubble, away from people. I was embarrassed and self conscious. I did everything possible to try to blend in with the crowd. Not draw any attention to myself.
I am no longer that person. Now, I am confident and HAPPY! I love meeting new people. I love trying new things. Heck, I got my hair cut for the first time in years and actually bought a blow dryer and curling iron.
And that confidence has spilled over into my professional life, too! I had my best year of law school, and graduated Magna Cum Laude in May. Two days after graduation, I got a job offer from a really awesome law firm. And I walked into my first day on the job with a level of confidence that I have never had before. I actually really believe in myself for once.
Getting up early in the morning to work out, going through law school, working full time, raising kids, studying for the bar exam – none of it has been easy. But as it turns out – YES, I CAN.